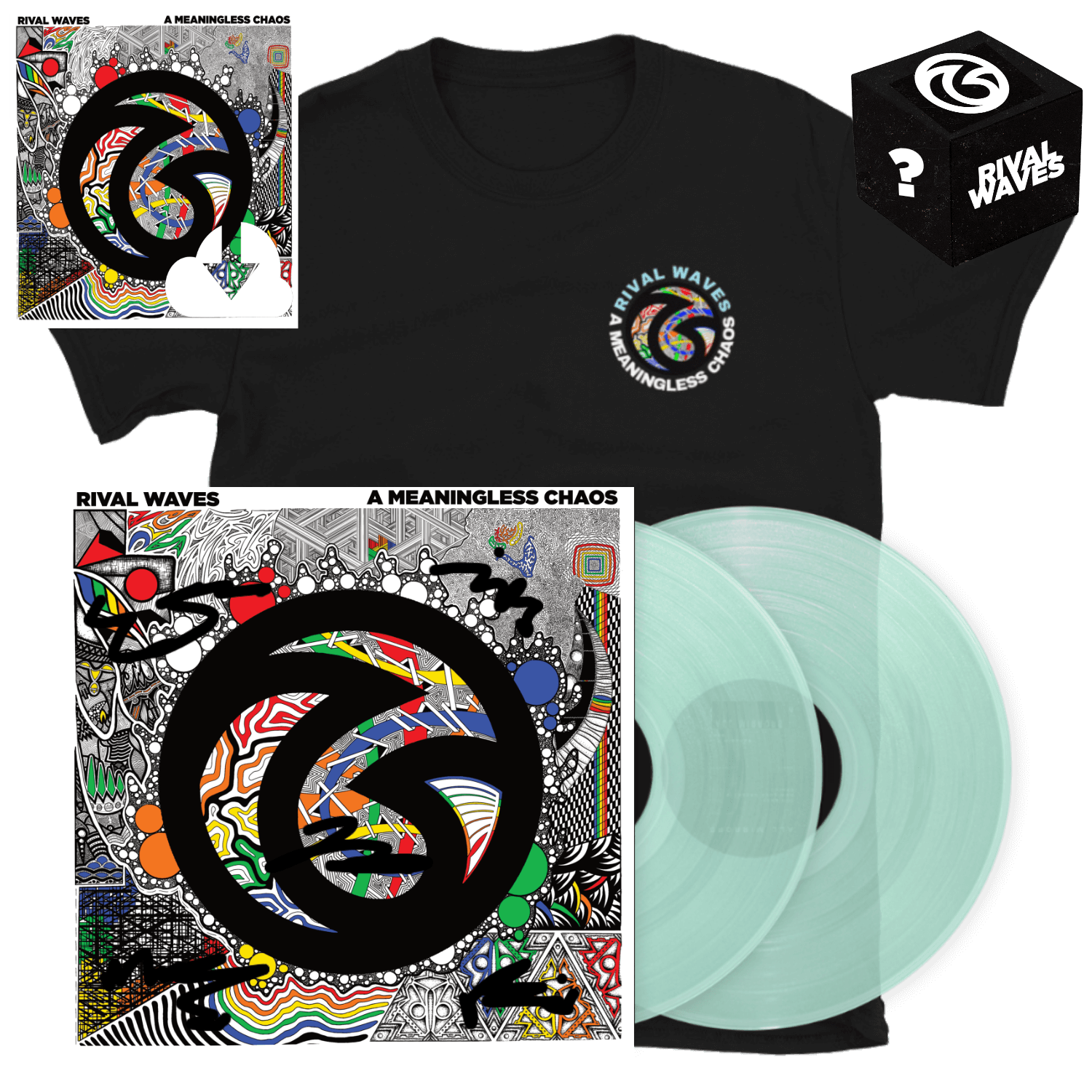 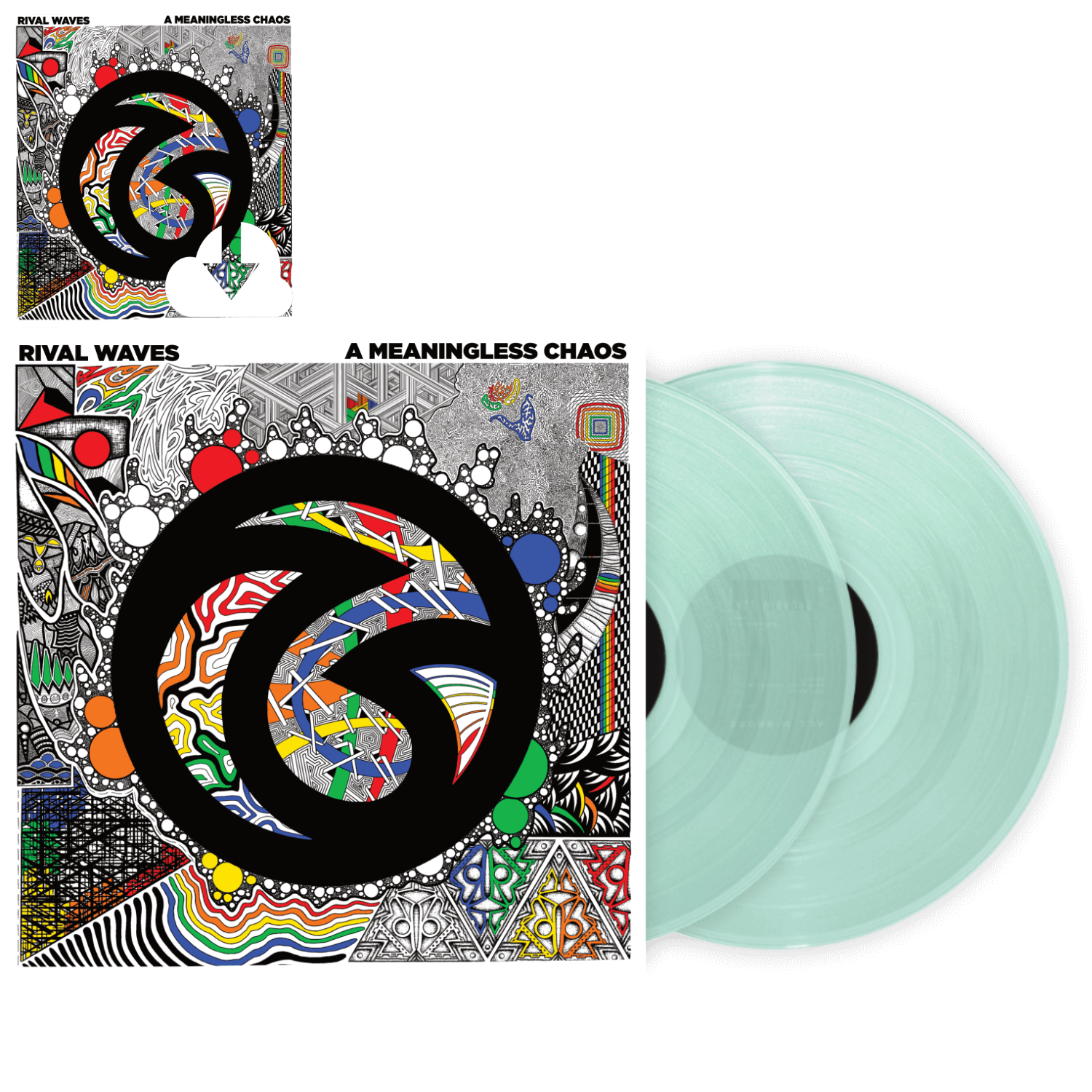 With access to the entire history of music in one's pocket, Rival Waves has come to appreciate the value and the beauty of the physical, analog album. Giving you access to our music on vinyl will always be a priority for us - not just for the "warmth" of the sound, but for the attention it demands of the listener and the magical experience it creates. Artwork presented in a tactile three-dimensional medium, the ritual of dropping the tone arm on the album, the act of experiencing the tracks in the order the artist intended - there's just MORE to an analog listening experience.

It is with this thought in mind that we present a 14-song "Deluxe Edition" Analog Experience of A Meaningless Chaos. The album on 2 gorgeous, 140-gram "Coke Bottle Clear" colored vinyl LPs, along with gorgeous artwork and lyric gatefold jacket experience by our good friend Taylor Wrinkle, and 3 bonus songs recorded during the A Meaningless Chaos sessions that will be exclusive to the Deluxe Edition listening experience. You'll also be receiving the complete Deluxe Edition as a digital download along with your Analog Experience. The ideal way we hope you'll listen to this album, however, is to grab a set of headphones, silence your phones, sit down with your copy of the album, hold the jacket in your hands, drop the needle and fully immerse yourself in the music.

A MEANINGLESS CHAOS - THE DEBUT ALBUM FROM RIVAL WAVES

Austin rock band Rival Waves has announced the release of its debut LP, A Meaningless Chaos. The album was produced and recorded by Grammy-nominated producer Chris "Frenchie" Smith (Jet, Trail of Dead, Built to Spill) at The Bubble in Austin, TX.  The standard digital album features 11 songs, with three additional tracks exclusively available on a deluxe double LP vinyl edition.

Rival Waves arrived on the Austin music scene in 2016 with a unique blend of conscious lyrics and a propulsive rock sound. Since then, the band has performed with international touring acts like Bush, King Gizzard and the Lizard Wizard and Blue October at some of the most notable venues in Austin including Stubb's, Mohawk, Empire Control Room, The Parish and 3Ten at ACL. The group's 2018 EP, TRANSDUCER, was released in 2018 and earned the band initial comparisons to Pearl Jam and U2.

The band selected Smith to helm the A Meaningless Chaos sessions. A former member of 90s alt rock royalty Sixteen Deluxe and Young Heart Attack, Smith has produced records for Meat Puppets, the Toadies, Built to Spill, and Jet and captured the rock n' roll live wire energy of the marathon recording sessions with the band. "As a combined team, we've never been more primed to release a significant, fiery rock record that has world-wide significance and is Grammy-worthy," Smith said of A Meaningless Chaos.

Rival Waves' singer, Joel De La Garza, says "kismet" best describes the creation of the album. "Frenchie was really aligned with our vision,"  De La Garza said. "This chaotic time in history has been compounded by our own personal traumas, and we wanted every song to reflect that chaos in its own, profound, way. We were very lucky to have someone who knew how to capture that energy on a recording."

FILL OUT THE FORM AND GET YOUR FREE EXCLUSIVE TRACK FROM

By clicking "Sign Up" you are becoming a Rival Waves email list subscriber. We value your privacy and will not spam you or sell your info. Unsubscribe any time.